This post comes from my archives, not the archives of this blog but my memory archives.  It takes us back 2 years, 2 months, and 24 days – a (very) specific day I will never forget!  I’m talking about New Year’s Eve 2014, the day I earned my “Mexican badge” and the night my water broke… during a mini-New Year’s party… at my house.  How could I ever forget that?!?

Jorge and I decided to invite some family over for NYE since leaving the house could be precarious (which became even more evident later that night).  This was about 2 weeks before the due date of Miss Camila.  As my first pregnancy, I firmly believed the wisdom I was hearing that the baby would likely be late.  I was not expecting the excitement that was to follow.

Here’s how the “badge” comes into play.  My sister-in-law Jen and I were busy all day making homemade empanadas for our Mexican husbands and family members.  We were really going all in.  Masa (corn dough) molded into the perfectly flat circles that make the semi-circle empanadas.  Meat perfectly seasoned and cooked.  Oil heated to ensure a goldeny-fried look but not so hot that it burns the masa.  It was complicated and oh-so-Mexican.  When the other family members arrived, I commented to our little group of fellow American significant others that the reason I was going through all of this work at 9 months pregnant was that I was trying to earn my Mexican badge (you know, like the Girl Scout badges you get for sewing, building a fire, cooking, etc.)  My sister-in-law hilariously noted that I didn’t need to worry about that.  “I think if you’re having a Mexican baby you automatically get the badge.”  I hadn’t thought of that!

I think if you’re having a Mexican baby you automatically get the badge.

The empanadas, if I do say so myself, were almost as good as “real” Mexican-made empanadas.  I call that a win!  The aroma, the deliciousness, the party… it was all too much for that baby-in-utero to miss out on.  They say that gravity does a great job in coaxing babies to the finish line.  Maybe the hours on my feet that day, trying to be a traditional Mexican housewife (if only for a day) let gravity do its work.  I like to think, though, that my little Mestiza just wanted to try those empanadas. 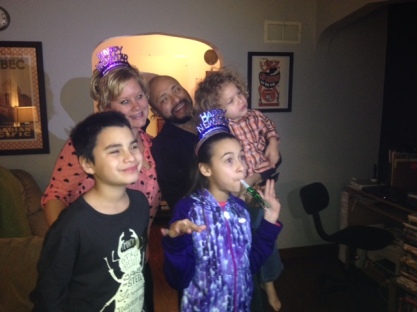 So, we ate and played games.  Others enjoyed some NYE libations as we awaited the midnight countdown.  Until, mid-sentence, my water broke in cinema-esque fashion.  Gushing fluids.  Thank God we were at home!!  We ladies, one a nurse, rushed to the bathroom.  It was a good prelude to getting over any privacy and humility issues I might have had going into labor/delivery.  Our sobrina (maybe 9 at the time) adorably knocked on the bathroom door to ask if the baby was here yet.

After the big excitement of the water break, what did we do?  Not hurry people out.  Not focus ourselves on the huge task ahead.  Not go to the hospital.  No.  We continued to celebrate NYE until after midnight, now with a new reason to celebrate!  A toast to 2015 and the monumental change that was about to take over our lives.

Side note:  Baby, you couldn’t have come one day earlier to get us that extra tax credit???